Wedding Ceremony Traditions & The Story Behind Them

So you’ve planned your wedding and you are going to include some popular rituals in your ceremony, but how much do you know about wedding traditions and rituals and where they’ve come from?

A lot of things happen before, during and after the wedding ceremony which couples incorporate into their celebration, sometimes because they are thought to bring good luck but other times just because its tradition. Some of the most popular are given below together with the stories about why these are used.

Traditions are great to keep the ceremony more meaningful, interesting and fun. If your planning on an unusual tradition to include in your ceremony, make sure you let your guests know why. You could make reference to it on the invitation so that guests can also understand.

Traditionally, this was used during times where arranged marriages were popular. It was used to conceal the appearance of the bride from the groom. Nowadays, it is used to preserve the bride’s modesty and purity. When a veil is lifted and removed from a bride’s face, it means that a couple has full access with one another. 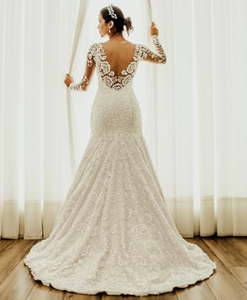 Before the 1840’s brides would simply wear the best dress that they owned until Queen Victoria started the white wedding dress trend in this country and many others in Western Europe which is still very, very popular today.

The Bride standing on the Grooms left.

At a Christian wedding ceremony, the bride stood to the left of the groom as in olden times the groom apparently needed his right hand free to fight off other suitors. 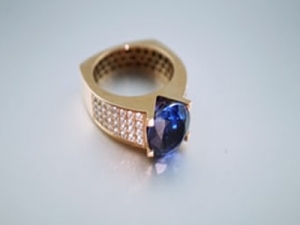 This tradition was introduced during the Victorian age and is said to bring good fortune when you wear them all together on your wedding day.   They were used as lucky charms to ward off evil spirits. Apparently evil spirits would pass on a curse called the Evil Eye that would make a woman infertile.  You may have heard the English Rhyme, “Something Old, Something New, Something Borrowed, Something Blue, and a Sixpence in your Shoe” which names the four good-luck charms plus a sixpence for prosperity and suggests the bride should have all on her wedding day.

Something Old: Represents continuity of life and family and the existence of unbroken love.

Something New: Represents optimism for the future and the brides new life as a married woman.

Something Borrowed: Refers to ‘Borrowed Happiness’ as a possession that once brought someone else happiness and now they are passing good fortune, happiness and cherished memories onto the bride.

Something Blue: Represents purity, love, loyalty and faithfulness in the marriage.

Father Walking the Bride Down the Aisle

This ancient times tradition started because of arranged marriages. This was from the time where a daughter was considered to be a ‘chattel’ (property) to be given away by her father to her new husband as a sign of transferring ownership.  The father used his daughter to pay debts or transfer the responsibility and care to the husband. Thankfully, things have moved on considerably since then but the tradition of the bride being ‘given away’ by her father remains.  This is why most fathers get emotional when they walk their child down the aisle.

Today, the father gives his daughter away as a way of blessing the marriage. Although it is one of the very special times at the wedding, some choose not to follow this and anyone in the family or a loved one can walk the bride down the aisle. Most women still look forward to being walked down the aisle by their father as a way to acknowledge the important role he had had in her life. 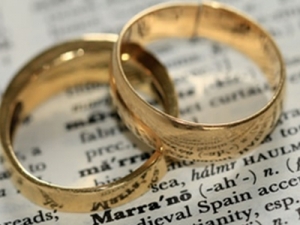 Western traditions of wedding rings can be traced to ancient Rome and Greece, and were first associated with the marital dowry and later with a promise of faithfulness.  The modern exchange of rings came from the customs of Europe in the Middle Ages as a Christian tradition emphasising the spiritual nature of the vows and representing the couples love and commitment and also the love of God.

Centuries ago flower girls in a wedding processional would carry sheaves of wheat and bouquets of herbs to give blessings of fertility and prosperity to the bride and groom. In modern times flower petals have replaced the wheat and herbs.

The throwing of rice or any grains was traditionally a sign of fertility and prosperity although today only a few ceremonies do this.  Some couples substitute it with other things like throwing petals or confetti. 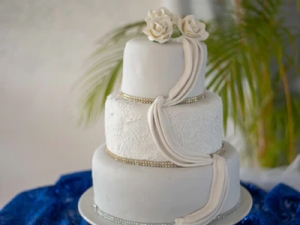 The cake itself symbolizes fertility and prosperity to the wedded couple. When the bride and groom feed each other pieces of cake, it represents unity with one another, a way of showing their love and commitment to one another in front of their guests. There is an older tradition though of throwing cake on the bride’s face or on each others. It is really up to the couple if they want to serve it without getting dirty or have fun and mess each other with some cake.

Another tradition is that the guests clink glasses for the couple to kiss.

A bouquet toss is traditional in a wedding. An old short story of tossing the bouquet is that brides are believed to be good luck. Guests try and get a hold of her to pass on the luck. To avoid it, the bride uses her bouquet as a distraction and throws it to the guests.

Nowadays, the bride gathers the female guests around her, and tosses the bouquet and the story is that whoever catches the bouquet will be married next. Some girls get competitive at this time and some just join in on the fun.

On the other hand, garter tossing is done for the men. Originally, it was the bride’s role to toss the garter. In times past, a bride would throw her garter as a distraction, to single men who want to get a hold of her. Another story goes that it was a sign that the marriage is ‘official’. Guests would wait outside the couples’ room and wait for the groom to remove her garter and throw it to single men.  The practice of garter tossing has been fading lately but some weddings still include it on their ceremony. The groom removes it during the reception and tosses it to single men at their wedding.

Bridal Showers can be traced back all the way to the 16th century when it began as alternative to the traditional dowry system of that time. (When the daughter’s marriage was arranged and a contract (dowry) was drawn up to pay the grooms family for the transfer of the bride in to the grooms family.) The brides friends and families gave small gifts to the bride to help her begin her married life if her family was too poor to afford a dowry or if the father did not approve of the husband to be.

In modern times dowries are not the norm but the tradition lives on as a way to celebrate a couple and the new life they are about to embark upon with small gifts to help them on their way.

This tradition came from the French. It is another way of throwing a ‘charivari’ for the couple. It is a parade that takes place the night before the wedding. Neighbours would walk down the streets and make as much noise as possible using pots and pans. This practice is done in order to ward off evil spirits. Nowadays, the tradition is passed on and practised by different couples around the world. Tying cans to the wedding car bumper and dragging them behind is a simple way of doing a charivari.

So what will you choose? 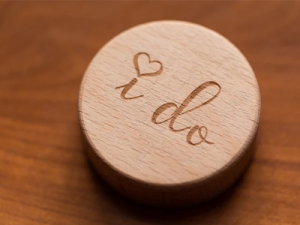 These are just the common wedding traditions done in most ceremonies. There are a lot more depending on where you are from. You can either follow them or not, it is up to you. Wedding ceremony traditions are just a way of making the ceremony more personal and meaningful for the couple and their guests.